A 12-Year-Old Warrior for Justice Angelika Soriano suffered her first asthma attack in the fourth grade, though she didn’t realize what it was at the time. She was walking to school in her Fruitvale neighborhood of East Oakland, California when pain gripped her body. She began to wheeze and cough. Unable to get sufficient air into her lungs, she found herself weakening until she was too tired to continue forward.

As luck would have it, her sister, Angelina, just two years her senior, also suffers from the disease. After getting a ride home, Angelika’s diagnosis was easy to derive—as she quickly regained her breath using her sister’s inhaler.

The children of Filipino immigrants, Angelika and Angelina are not alone. In East Oakland, where 93 percent of residents are people of color, children are more than twice as likely to visit an emergency room or be hospitalized for asthma than those in the county of Alameda overall, according to the Alameda County Public Health Department. A leading culprit identified by the Department is the disproportionally high amount of outdoor air pollution where they live—among the highest pollution rates in the state—caused by an over-concentration of motor vehicles, refineries and power plants.

A little more than two and half years later, Angelika, now a remarkably mature and composed 12-year-old, organizes to protect not only the quality of the air she breaths, but on behalf of everyone’s environment and climate. I meet Angelika as she recounts some of this story to a group of about 100 fellow middle- and high-school students, predominately youth of color from low-income East and West Oakland. They are joined by teachers and parents, all gathered together on Halloween eve. Like Angelika, many are costumed in zombie face paint, having just finished marching through the affluent and exclusive Oakland Hills neighborhood.

They did not come to ask for candy. Rather they have led a “Zombie March on Coal” from a local park to the private home of local developer Phil Tagami. Carrying banners and signs reading, “Oakland vs. Coal” and “Stop the Tagami Coal-Pacolypse” they are here to protest Tagami’s plans to build a coal export terminal in West Oakland. If approved, it would be the largest such terminal on the West Coast, taking in train shipments of coal from Utah, with plans to potentially export millions of tons of coal annually. Tagami’s plan fits nicely with the Trump administration’s repeal of the Clean Power Plan and frequent pledges to increase U.S. coal production and “end the war on coal.”

Tagami’s house is festooned with ghouls of its own. A tall green Frankenstein mannequin and a grey bloodied skeleton dressed in rags stand guard on opposite ends of his sprawling second-story balcony, arms outstretched and looming over the protesting children gathered on the street below. The first floor of the home is well hidden behind a low grey-green raised cement wall, behind which stands a much taller red wood fence. All of which tower above Angelika as she walks to the front of the crowd, her back to Tagami’s house, and takes the microphone attached to a small speaker placed in a baby stroller. Behind her, the youth have propped grey cardboard tombstones along Tagami’s fence that read, “RIP Health,” “RIP Lungs” and “RIP Clean Air.”

Angelika is easy to overlook at first. Her voice is small, as is her body, which all but disappears inside an oversized thick green cotton sweatshirt hanging to her knees, with the name of her middle school, Urban Promise Academy, stitched in gold on the right-hand side. Her hair is tied in a thick black braid that ropes around her neck and hangs down her chest. I never see a smile cross her face, which is etched in white and red zombie paint.

“I know I might be little,” Angelika begins. “But I make a huge impact on this earth.”

With these words, all attention turns, unwavering, to Angelika. She recites a spoken-word poem she has written, which she now addresses personally to Tagami. At first, she later recounts, she was frightened. But then, looking at those around her, “I saw that they are one of me,” she explained. “I became very brave and courageous.”

“Coal,” she begins, pausing for effect.

“The beast that once lived under the ground has risen.

The dirty beast. The dirty dusty rock that is invisible but visible to smell.

The laughing beast. The beast who would be glad to hear the screams of people saying, “I can’t breathe!” and fall to their knees trying to stay conscious before they became nothing.

Angelika is a Warrior for Justice. It is the name of a club at her school founded and led by her teacher, Cory Jong. Jong stands serene as she listens intently to Angelika, little emotion visible across her zombie-white painted face, her eyes and lips blackened, and a white N95 protective facemask resting on her head. A Chinese-American, Jong is a member of AF3IRM, “a national organization of women engaged in transnational feminist, anti-imperialist activism and dedicated to the fight against oppression in all its forms,” according to its website. They organize under the slogan, “a woman’s place is at the head of the struggle.”

At age 40, Jong is in her 12th year of teaching. She founded Warriors for Justice a little over two years ago. Until this year, all of its members were girls, ages 11 to 14. Jong wanted to engage her students in advocacy and social justice on the issues that most directly impact them in their community, she tells me. The students pick the topics—which have included sex trafficking, violence, environmental racism and climate change. She has found great support both at the school and among parents. Warriors for Justice joins other clubs espousing feminist principles, including Girls Inc. of Alameda., that have worked to empower the girls to not just participate in today’s action, but to lead it.

Brooke Anderson of Climate Workers, a membership organization of rank-and-file union and nonunion workers advocating for climate justice in the Bay Area, also helped with the organizing. “You can tell the youth were in the lead,” she says. “This is way more fun than anything that we would have done!”

Angelika says that many of the other girls at her school are shy and sometimes afraid to speak out. She is proud that she can do so on their behalf. She chooses this particular issue because, “the coal dust could go anywhere: the water, the air, into everyone’s bodies, and it could affect rates of asthma—more people having asthma. It can harm the environment overall and the climate.”

Angelika first learned about climate change when she was in elementary school. Her older sister then introduced her to the idea that “maybe I could have my voice heard, or at least a few people could hear my opinion,” she recounts. Today, her plans are to continue Artivism—art as activism—for the foreseeable future, “showing everyone how to be brave or how to have their own voice out there.” 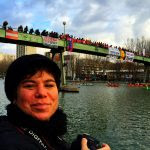 Antonia Juhasz is an investigative journalist, energy analyst and author of several books. Juhasz most recently reported for Ms. from the 2015 COP21 United Nations Paris Climate Accord Negotiations, writing the feature article, “Women Take on Climate Change,” for the Spring 2016issue. Her writing regularly appears in outlets including Rolling Stone, Harper’s Magazine, and Newsweek, among others. She lives in San Francisco. Follow Antonia on Twitter.